12 Days Full Board Classic Round Voyage

The coast of Norway is often rated as one of the most beautiful places on Earth. Discover the full range of this natural treasure on our 12-day round trip voyage. Call on 34 ports, sail world-famous fjords and encounter unforgettable scenery along the way. Learn from complementary lectures and onboard activities from our Hurtigruten Guides and choose from 90 exciting optional excursions.

Bergen
The journey begins in the gateway to the fjords

Your voyage starts in Bergen, a city surrounded by seven mountains. Before departure you may wish to explore this cultural gateway to the fjords. Bergen was founded in 1070 AD, and was the capital of Norway for several years. The city is a central point for Norwegian travel, and has retained a great deal of local character and history. One example of this is the historic UNESCO-listed Bryggen district with colourful wharfs that date back to the 14th century. Take a stroll around this charming and compact city, spend some time in one of the outdoor cafés and restaurants, enjoy a trip on the Fløibanen Funicular or visit the famous fish market.

After embarkation, we invite you to enjoy our tasty dinner buffet, based on the best ingredients from the coast. We sail north from Bergen along the Hjeltefjord, the same route the Vikings once plied to the Shetland Islands and beyond. We are heading to the high north. Spend the rest of the evening relaxing as you admire the spectacular landscapes, either from deck or in our panorama lounges.

Florø - Molde
A day for architectural and natural masterpieces

If you wake up early the next day, you have the chance to enjoy the breathtaking beauty of the Nordfjord, followed by a delicious breakfast. As we sail past the West Cape, we are out on the open sea. The ship then navigates through skerries and islands before reaching Ålesund.

Few large cities have managed to preserve their intimacy as effectively as Norway’s third largest city, Trondheim. Viking king, Olav Tryggvason, founded this ancient city as early as 997. Join our optional excursion to Norway’s national shrine, Nidaros Cathedral, the country´s only Gothic-style cathedral built over the burial place of St. Olav, Norway’s patron saint. Here you can marvel at the cathedral’s incredible architectural details and exquisite works of art.

In the afternoon, the ship sets a northwest course, passing the beautiful Kjeungskjær lighthouse and numerous charming islets and rocky outcrops.  After passing through the narrow Stokksund, the ship heads towards charming Rørvik.

Brønnøysund - Svolvær
Welcome to the Arctic!

Today we cross the Arctic Circle! This invisible line is situated at 66 degrees 33 minutes north and marks the border to the Arctic Region. In summer, this means 24-hour daylight - often referred to as the ‘midnight sun’. During winter, being above this latitude provides the best chances for experiencing the Northern Lights. Even if you aren’t awake to see the Arctic Circle, the captain makes sure that the occasion is a memorable event. If you are sailing in Arctic waters for the first time, you can participate in a daytime Arctic Circle ceremony on deck.

In winter, crossing the Arctic Circle is when the hunt for the Northern Light begins. We celebrate the event by presenting a multimedia show, ‘The Magic Light, Aurora Borealis’, featuring pictures, words and music. As we sail through the narrow Raftsund, we stop at the entrance to Trollfjord. Here we serve freshly made fish cakes out on deck. You also hear the story of ‘The battle of Trollfjord’, which took place here in the winter of 1890. If you look closely, you might see trolls up in the steep mountains. Or you might not.

Get ready for a day full of exciting activities, whatever the season! During the morning hours, we briefly dock at Risøyhamn, Harstad and Finnsnes. The ship then continues to Tromsø, `Capital of the Arctic´, for a prolonged stay. Many epic Arctic expeditions used Tromsø as a starting point. Join our `Polar History Walk´ in winter to learn more about the explorers and Arctic hunters, and to taste beer made at the world´s northernmost brewery.

The ship is now sailing into waters where you have the best chance of seeing the Northern Lights between September and March. We gather on deck to search the skies for this breathtaking phenomenon.

Øksfjord - Berlevåg
At the top of the world - North Cape

Enjoy magnificent sub-Arctic landscape as we cross the 71st parallel on our journey towards North Cape, one of the northernmost points on the European continent.

The vistas become more dramatic as we approach Kirkenes. We arrive in nearby Vadsø early in the morning and just after breakfast, arrive in Kirkenes, at 30° East, further east than Istanbul and St. Petersburg. This is Hurtigruten’s turning point for the return journey southwards. Kirkenes is known as the capital of the Barents region and gateway to the east.

In the middle of the night, we dock at Mehamn, where it is possible to join an unforgettable snowmobile trip through one of Europe's most extreme and exciting natural areas during winter time. Experience snow-clad valleys, fresh winter air and perhaps the mesmerising Northern Lights in the clear, starry sky.

We arrive at Harstad this morning, where you have the opportunity to participate in one of the classic Hurtigruten excursion programmes: A taste of Vesterålen. Experience history, beautiful scenery and a selection of breathtaking sites that include a visit to Trondenes Church, one of Norway's premier cultural heritage sites from the late Middle Ages.

Bodø - Rørvik
Enjoy a date with the Seven Sisters

Crossing the Arctic Circle at 66°33’N is an important ‘rite of passage’. Today we celebrate the event out on deck with a `taste´ of Arctic tradition – a spoonful of cod liver oil. As we sail along the Helgeland coast, you pass hundreds of islets, fertile farmland and steep granite walls rich in local lore. On deck you can see the strange mountain Torghatten (rising 258 m above sea level), famous for its distinctive hole right through the middle. The hole is 160 m long, 35 m high and 20 m wide, and was created during the ice age.

Trondheim - Ålesund
In cod we trust

Today provides another opportunity to explore the city of Trondheim. Back on board, the ship heads out into the majestic Trondheimsfjord, which is 170 km long and up to 25 km wide. Like all other Norwegian fjords, it is deep, plunging to 577 m.

During the night, the ship calls at Ålesund, Torvik, Måløy, as the world’s most beautiful voyage draws to a close. Before we dock in Bergen, there are some nautical miles of fascinating scenery ahead of us, including the picturesque Nordfjord below the enormous Jostedal Glacier. Here the fjord widens to the east and forges 90 km inland to Loen and Olden. 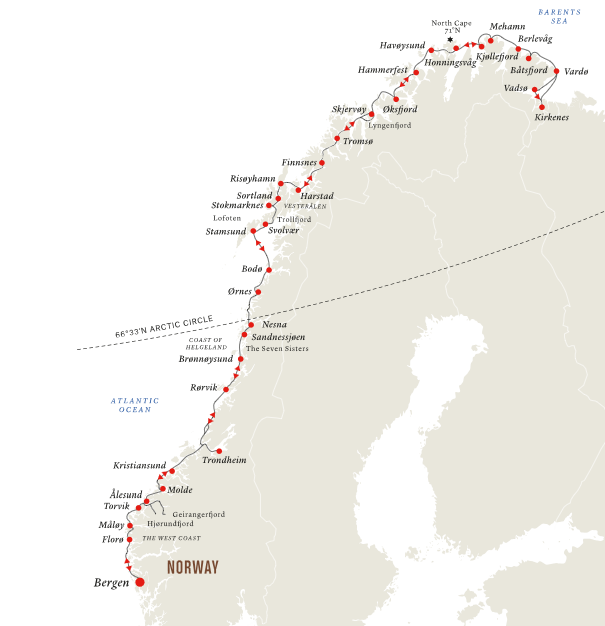 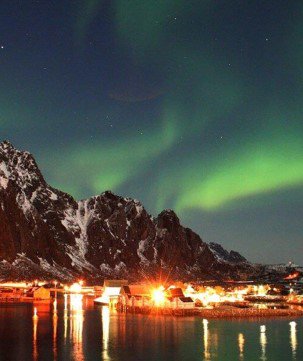 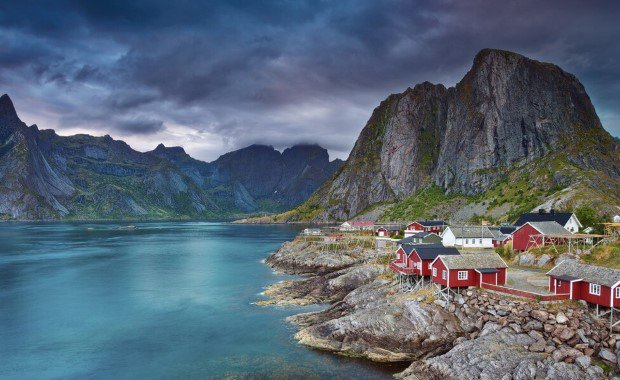 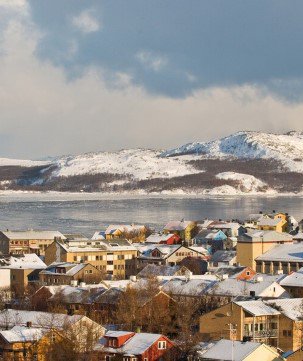 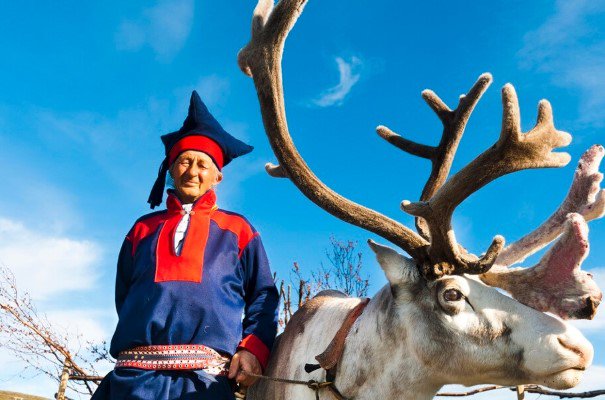 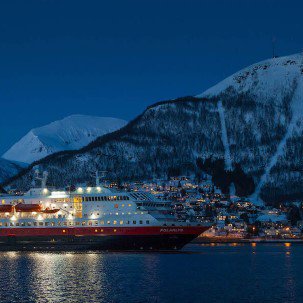 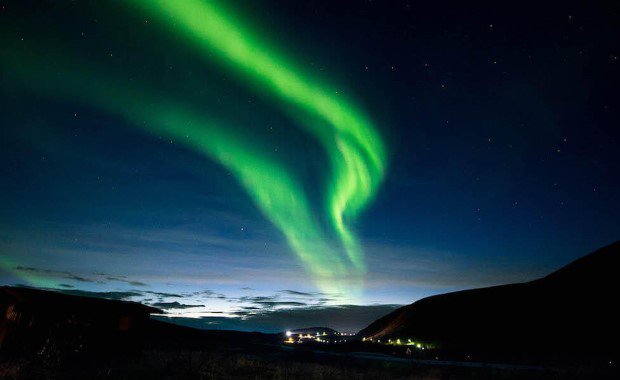 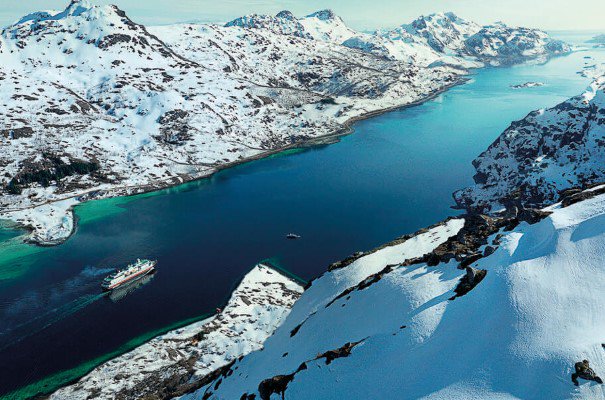 Northern Lights Occurrence is defined as a sighting from the ship which is recorded by the ship’s deck officers and which is announced to passengers on board. An occurrence can last anything from a few minutes to a matter of hours, and the ships decision as to whether the Northern light occurred is final. We hope that you will experience seeing the Northern Lights whilst on your Classic Round Voyages cruise or select Expedition cruises in Norway, although we cannot be held responsible if you don’t. We do however, promise that in the event of there being no Northern Lights Occurrence as defined above on your voyage, we will invite you back to cruise with us once more

Prices are based on 2 adults. Offers are subject to availability and can be changed or withdrawn without notice. Terms & conditions apply.